Left Caucus and Las Vegas DSA unreservedly condemn the subversion of our democratic process by elected officials and supporters of the losing slate. 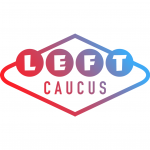 This decision to run these campaigns outside of the state party is, in reality, an attempt to run these campaigns outside the oversight of Nevada Democrats. It is a move that purposefully circumvents the mandate of the State Central Committee and disregards the results of our free and fair officer elections. We decry this shameless bid to ignore the voices and values of the Nevadans these representatives claim to serve.

We recognize that this is only the latest development in a continued assault on the right of Nevada Democrats to govern their own party. Ever since the election of Chair Whitmer and the Progressive Slate, the political elite has made it clear that it has no intention of respecting the choices of rank-and-file members.

It is time for us to send a message: free, fair, and open democracy is not a slogan – it is a foundational principle that we, as a party, must embody.

Nevada’s working people deserve to be treated as partners in the democratic process, not as subjects to be dictated to by a wealthy and privileged elite.  In the coming primary season, Democrats will remember who among our representatives stood for the choice of the people and who stood only for themselves.

Left Caucus and Las Vegas DSA remain committed to their mission of lifting up the voices of Nevada’s working class and marginalized communities, transcending our differences and uniting us in our shared struggle for justice, equality, and democracy. When we fight together, we win together.