Book Review: “What Every Environmentalist Needs to Know About Capitalism” 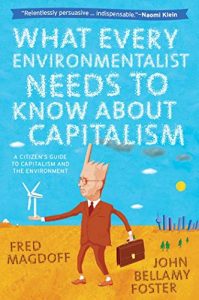 Fred Magdoff and John Bellamy Foster’s excellent 2011 book “What Every Environmentalist Needs to Know About Capitalism” is essential reading for ecosocialists and environmentalists of any political tendency. At 160 pages, the book does an exceptional job of describing how capitalism is directly connected to ecological degradation and why its abolition is necessary in preventing ecological catastrophe. This review will attempt to summarize the fundamental arguments of the book and its case for ecosocialism. The book goes over more than discussed below, so make sure to read the whole thing for more useful information and details.

Magdoff and Foster do not start off with a discussion on political economy, but instead introduce a scientific concept known as planetary boundaries. Planetary boundaries are an important development in the study of Earth’s natural systems and a concept that is indispensable to any environmentalist trying to understand our impact on the planet.

The planetary boundaries are a set of boundaries with respect to nine different Earth system processes:

All nine of these boundaries have an associated threshold, and staying within these thresholds is essential to maintaining the “relatively benign climate and environmental conditions that have existed during the last 12,000 years.” Crossing the threshold associated with any planetary boundary must be avoided at all costs to keep Earth’s systems in check and protect the natural environment and all its life forms.

As detailed in the book, the planetary boundary of ocean acidification is determined based on the global mean saturation state of aragonite in surface seawater. The pre-industrial value was 3.44 (surface ocean aragonite saturation state). The threshold for this planetary boundary, which must not be crossed by declining, is set at 2.75, and crossing this threshold would lead to “massive die-down of shell-forming organisms.” The current value stated in the book is 2.90. Of the nine planetary boundaries, three have already been crossed* (climate change, biodiversity loss, nitrogen and phosphorus cycles), with others on their way.

Magdoff and Foster also make note of natural resources and their limits. Natural resources such as oil, gas, and minerals are limited to the quantity that currently exist, and their exhaustion would prevent future generations from being able to use them. Other natural resources, such as forests and fish, are renewable insofar as they’re used in a sustainable way. However, renewable resources can be exhausted just like non-renewable resources by exploiting them before they can be renewed, which is referred to as ‘overshooting’ a resource. For example, the authors note how overfishing is leading to the rapid depletion of ocean fish, almost to the point of extinction.

By priming the reader with these boundaries and limits, Magdoff and Foster make their critique of capitalism much more impactful by exposing a fundamental contradiction between environmental sustainability and capitalism later on.

Magdoff and Foster define capitalism as

“an economic and social system in which the owners of capital (or capitalists) appropriate the surplus product generated by the direct producers (or workers), leading to the accumulation of capital—investment and amassing of wealth—by the owners. Production takes the material form of the production of commodities for a market with the aim of generating profit and promoting accumulation. Individuals in this system pursue their self-interest, checked only by their mutual competition and by the impersonal forces of the market.”

The critique of capitalism throughout the book is focused mainly on how production is organized under capitalism. A capitalist system produces commodities, where a commodity is defined as a product that is produced for the purpose of exchanging it. Capitalism follows a dynamic described by M-C-M’, where money (M) is used to produce a commodity (C) to exchange for more money (M’), where M’ is equal to the original M plus an additional amount of new money, or surplus value. The common but incorrect perception of capitalism is a dynamic of C-M-C, where a commodity is exchanged for money to buy another commodity. C-M-C does not accurately describe capitalism because the end goal of this process is to use the commodity you bought. Under capitalism, the end goal of a transaction is for a capitalist to generate surplus value or profits, and this cycle repeats ad infinitum.

Capitalists use capital (e.g. factories, machinery) to constantly make profits and expand value, and the authors provide an understanding of capital in this way as “self-expanding value.” Capital accumulation, then, is a fundamental drive of capitalism, since it’s necessary for the expansion of value. The more capital you have, the more value and profit you can create. Capital accumulation invariably means expansion of the economy. A capitalist economy must constantly expand, and there is no built-in endpoint to its growth. Expansion is the logic of the system.

There is a major contradiction here which is the fundamental takeaway of the book. The constant need for a capitalist economy to grow is inconsistent with the need to remain within planetary boundaries and preserve our environment. Constant economic growth guarantees that planetary boundaries will eventually be crossed and resources will eventually be exhausted, because constant economic growth requires unsustainable increases in energy and resource use. The saying that “there is no infinite growth on a finite planet” is fundamentally true. The authors talk about other issues with capitalism that prevent any real environmental reforms, such as deregulation and lobbying, but this contradiction between the need for constant expansion and the need to stay within environmental boundaries is the fundamental issue.

This book is making the case for shutting down the engine, or in other words, abolishing capitalism. Magdoff and Foster state the need for an economy that does not require growth and remains generally stable in size, known as a “steady-state economy.” Not only must it not grow, but rich countries need to actively reduce the size of their economies to sustainable levels first and keep those levels steady, so developing nations have room to sustainably develop and reach their own steady-state. This is known as degrowth.

The immediate purpose of abolishing capitalism and having a steady-state economy is to stop ecological destruction. Clearly, if chopping down too many trees is destroying the environment then we must remove the system that demands unsustainable and ever-increasing deforestation. But chopping down trees and using resources is necessary to some degree, even though the cutting down of a single tree is ‘environmentally destructive.’ A more subtle and enlightening reason for these measures is not that we will simply stop destroying the environment, but that we may begin to have a healthy ‘metabolism’ with it.

Karl Marx formulated a concept mentioned in the book called metabolic rift. Metabolic rift is a process where the dynamics between society and nature (social metabolism), which can be understood as the flows of energy and materials between society and nature, are no longer ‘balanced’ and start to experience a rift, which Marx attributed to be the cause of ecological crisis. When a person chops down a tree to make a canoe, the tree that was chopped can regenerate and the overall metabolism between the person and forest is still balanced. But if a person chops down trees at such a rate to where the ecosystem begins to collapse, the metabolism between the person and the forest will experience a rift due to the irreconcilable processes of the person and the forest, leading to ecological crisis. In other words, a crisis will occur because the person is doing something that the forest cannot support. Capitalism, then, is a means by which we create rifts in our social metabolism, because capitalism forces us to do things which the environment cannot support.

A socialist economy, where growth imperatives and profit motives have been abolished and production is managed and planned by society as a whole, would allow us to have a healthy social metabolism because we could plan economic activity to the specifications of our environment. We can plan our economy to make sure we never extract more than can be regenerated and waste more than can be absorbed. In other words, no more metabolic rift. If the environment is unable to assimilate a certain amount of waste we produce, we can reduce waste by scaling down production. As discussed earlier, it is impossible for capitalism to do this since it must constantly grow and attempting to scale down production violates the entire logic of the system. A socialist economy that emphasizes environmental sustainability, or ‘ecosocialism’, will allow us to create a sustainable relationship with nature that capitalism makes impossible.

As Magdoff and Foster make clear, creating a society like this will require nothing short of an ecological and social revolution. They emphasize the importance of policy to mitigate the effects of climate change and other rifts, such as carbon taxes, international agreements, and environmental regulations, but they also emphasize the need for a struggle that transcends instituting policies within the capitalist framework.

Magdoff and Foster describe this struggle as

“[A struggle] ultimately against the system of capital. It must begin, however, by opposing the logic of capital, endeavoring in the here and now to create in the interstices of the system a new social metabolism rooted in egalitarianism, community, and a sustainable relation to the earth.”